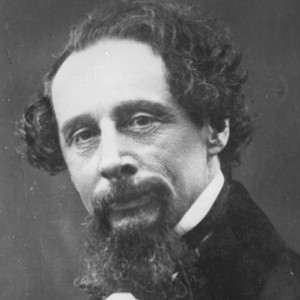 On Friday the 7th of February 1812, in Portsmouth the greatest – or at least the most prolific – of the great 19th-century novelists, Charles Dickens was born. Lionised when alive, still venerated almost two centuries later, he penned a whole pantheon of works so unique in their style and ability to portray character and caricature that we still use a derivation of his name – Dickensian – to describe both squalid living conditions and humorous if sometimes repulsive people.

Although of a middle-class family, Dickens was withdrawn from school and put to work in a shoe blacking warehouse when he was twelve because his father had squandered his money and been imprisoned for debt. He later returned to school but at fifteen abandoned all formal education to become a solicitor’s clerk, then a court stenographer and at seventeen a newspaper reporter.

By the time he was 24, however, Dickens had already started to make his mark as a writer, with the publication in instalments of The Pickwick Papers, which was a huge success with the public. The same year, he married Catherine Hogarth, who would bear him ten children. From that time onwards, outwardly at least, Dickens was the successful and contented author living the respectable Victorian life (Victoria having assumed the throne in 1837).

Indeed, by all accounts Dickens had both wit and charm. In one house he had a secret door to his study that was disguised to look like a bookcase, with painted shelves and the spines of books bearing fictitious titles. One set bore the tide The Wisdom of Our Ancestors and included individual volumes on ignorance, superstition, the block, the stake, the rack, dirt and disease. Beside them sat a single slim companion book entitled The Virtues of Our Ancestors, so thin that the title on the spine had to be printed vertically.


His Career Takes Off

After the success of The Pickwick Papers, Dickens continued to turn out long, successful novels – Oliver Twist followed by Nicholas Nickkby and The Old Curiosity Shop, a book adored by the public particularly for its sentimental handling of the death of Little Nell. (Not everyone has found it so touching, however. Oscar Wilde once remarked, ‘One would have to have a heart of stone to read the death of Little Nell… without laughing.’)

In 1843 Dickens published his most syrupy work, A Christmas Carol, which was an immediate success. His own favourite, the partly autobiographical David Copperfield, came out in 1850, followed during the next four years by two novels of social protest, Bleak House and Hard Times. An enthusiastic public eagerly awaited almost all of these, and Dickens became a national figure.

Suddenly, in May of 1858, when Dickens was 46, his wife Catherine moved out, although nothing was said to the outside world. The reason? Ten months before, Dickens had met and fallen in love with an attractive actress named Ellen (Nelly) Ternan, who was 27 years his junior. Two months prior to the collapse of his marriage Dickens had written to a friend :

The domestic unhappiness remains so strong upon me that I can’t write.’

After his wife’s departure, however, Dickens evidently regained his creative flair, turning out such masterful novels as A Tale of Two Cities, Great Expectations and Our Mutual Friend. Meanwhile his sister Georgina came to live with him, caring for his younger children and taking care of the household.

his American publisher called him ‘the cheerfullest man of his age’

As he grew older, Dickens seems to have become inwardly sad and preoccupied although outwardly as ebullient as ever. His American publisher called him ‘the cheerfullest man of his age’. He now increased his workload, contributing to magazines and scheduling public readings of his works around Great Britain and in the United States. He undertook another tour of England in 1869, but abandoned it in April when he collapsed. Even then he continued to work, starting The Mystery of Edwin Drood and giving readings in London. Then, suddenly, on 9 June 1870 he died at his country house, Gad’s Hill in Kent. So revered was he by the nation that he was buried in Westminster Abbey.