This saying refers to the apple crop, and the quantity of cider that may be expected, judging from the month in which the trees come into bloom.

NO GENUINE local food table could be considered complete without a bottle of cider. This delicious, and potent, brew was made in both of the larger Channel Islands but techniques were interestingly varied.

Cider’s History in the Islands

From the middle of the 16th century until at least the First World War, apple-growing and cider-making played a most important part in the lives of the inhabitants of the two largest Channel Islands. For example we know that in 1670 Jersey was already exporting large quantities of cider to England and orchards appeared in place of corn crops, so much so that in 1673 the Jersey States passed an Act which forbade the planting of orchards, except in replacement of old ones.

From these orchards Jersey eventually exported approximately 1,800 hogsheads annually (one hogshed = .54 gallons). ‘Le Sieur’ Jean Wesley Cabot, of Jersey, won medals of gold, silver and bronze as well as diplomas – all awarded for the excellence of the cider which he entered at exhibitions in Paris, Marseilles, Lyons, etc. , as well as at a big Channel Islands Exhibition, in 1871.

By contrast though, in Guernsey the cider-making industry does not appear at any time to have been as extensive as in Jersey, although a considerable number of orchards are shown on the Duke of Richmond’s map in 1787.

Along with Jersey Guernsey certainly developed her own apple Cider varieties. Many of those though appear to have been lost, but among those known are the following :


However, the acreage of cider apples declined in the second half of the 19th century and the final decline took place between the two World Wars. 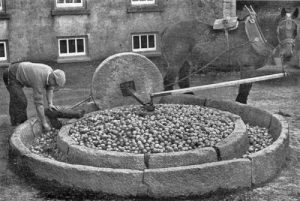 As in England and the Continent, there is little doubt that the first cider-making plants consisted of circular troughs hewn out of solid stone, around which a horse, or, possibly, an ox, pulled a large flat circular stone. This was the practice in most areas, and you can still see many of these huge granite troughs around the island – more commonly used as flowers beds today though although.

The crushed apples were picked up from the trough and placed on the press between layers of straw, so that the juice could be extracted as a huge wooden screw, supplemented by weights, screwed downwards further and further, its pressure being exerted on the pulp via a very strong wooden ‘table top’, which had been placed on top of the layers of pulp.

Often cider-making involved the use of local supplies of apples, augmented with cider apples bought from France and Jersey.

As well as the stone troughs to crush the apples some farms used a wooden framework instead which meant it could be made and repaired by a local carpenter and its structure enabled the work of cider-making to be done at a faster rate. This type was introduced into Guernsey in the second half of the 18th century, when it became quite popular, although it appears that it was relatively unknown in Jersey.

As in the case of the stone type, the apparatus was pulled around by a horse and the cogs were activated by the huge horizontal wooden wheel which operated the steel crushers, so that the crushed pulp slid down a chute into a large tub, from which it was picked up by long-handled copper shovels and placed on the press.

Cider-making started during October. Most farms posessed cider presses in one of their outbuildings and a cellar in which the casks of cider were placed to ferment. The first batch of cider made was referred to as “le meis d’Octobre“.

Work used to start at seven in the morning, when the dried pulp from the press was carried into tubs to be used as cattle food. However, in Jersey the dried pulp was also used as manure around the apple trees.

The morning’s crushing started after the morning break and it would be continued until 12 o ‘clock. Two workers would shovel the pulp on to the press and cider soon began to pour out of the floor of the press, which had sides of about four inches in height and had a hole which allowed the cider to fall into a tub underneath it, from which it was taken and passed through a sieve before it ,was poured into huge storage tubs. 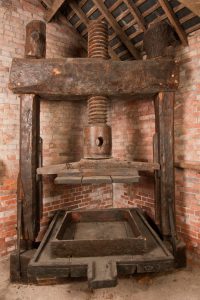 From here it was placed into the barrels, where fermentation commenced and the natural yeasts in the apple juice got to work transforming the sugar into alcohol. This process took two or three weeks depending on the weather.

The scum which rose to the top of the barrels was regularly cleared out of the bung hole, which was kept topped up with a little water. When fermentation was over the bung was tightly attached and the cider was ready for delivery. Any sour cider was made into cider vinegar, which was in considerable demand.

The cider season commenced in October and finished in January.

Each farm could produce hundreds of barrels so as well as ‘home consumption ‘cider was also sold by the farms to public houses and to off-licences.

At Christmas there was a great demand for the cider and on Christmas Eve and Christmas morning quite often several men had to be employed at the farms themselves to serve all their customers.