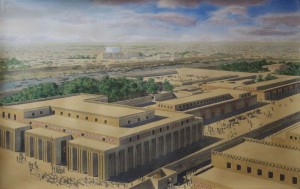 Thursday July 12 2007 was a seminal day (apparently). On that day a United Nations report, that coincided with World Population Day, revealed that for the first time in history, more people were now living in cities than rural areas. But how did this come about ? Why and how has mankind migrated over the millennia from living a bucolic existence amongst nature in small villages to the massive urbanised sprawl where millions live cheek by jowl?

As we will see key argricultural and technological developements needed to happen before infrastructures capable of sustaining hundreds then thousands and finally millions of people into densly packed areas could function.

Certainly today, most people in the Western world live in cities – but this is increasingly also the case in rapidly developing countries such as India, China and Brazil. Mass urbanization is a relatively recent phenomenon, associated with industrialization and the mechanization of agriculture over the last two centuries.


How it used to be

Prior to this the vast majority of people lived in the countryside, working the land. But cities have existed since the very beginning of recorded human history, over five millennia ago, and were from the start important centres of power, as well as engines of cultural and technological change.


The First Cities – An Evolution

Cities largely grew from towns, which in turn started as villages. The first permanent villages came with the beginnings of agriculture in the Middle East some 10,000 years ago, although some settlements may have begun not as farming communities, but as markets at the intersection of trade routes. Trade certainly played an important role in the development of larger towns and cities, but growing urban populations could have not have been sustained without an intensification of agriculture, which in many places was only made possible by large and complex irrigation schemes.

Below we list some of the neccessary steps needed along the way to urbanisation – note though that the order is purly arbritarty – all are were needed , many developing at the same time, in order for this to happen.

Step 1 : The Importance of Water

Between 4000 and 2000 BC the first urban civilizations arose independently in four different parts of the world:

Between the Tigris and Euphrates rivers in Mesopotamia (modern Iraq);
Egypt’s Nile valley;
The Indus valley in what is now Pakistan;
Along the Yellow River (Huang He) and the Yangtze (Chang Jiang) In China.
Irrigation could mean that instead of just one crop a year, two or even three crops could be harvested.

All of these great rivers are prone to seasonal variations in flow, with flood alternating with drought. To maximize agricultural production, it was necessary to build dams to store the flood waters in reservoirs, and then dig ditches to water the fields during the dry season. Once this technology was developed, farmers found that they could move into more arid areas. Irrigation could mean that instead of just one crop a year, two or even three crops could be harvested.

The Beginnings of Writing

The earliest forms of writing developed independently in the cities of Mesopotamia, China, the Indus valley and Mesoamerica. The first systems were generally pictographic – consisting of symbols representing things or ideas – but in Mesopotamia a more flexible syllabic script, known as cuneiform, had developed by 2800 BC.

Writing helped the ruling elites to maintain control, being used to label and list property, and to name the succession of kings. Later, writing was also used for recording commercial agreements, for personal and government letters and, most importantly, for defining the laws – an important step in tempering the absolute power of the ruler. Literature, however, remained an oral phenomenon for much longer: one of the world’s earliest known literary works, the Mesopotamian Epic of Gilgamesh, was only written down in the 7th century BC.

Constructing such irrigation schemes required an accurate calendar to predict when the floods would come, and a high degree of social organization, necessary for establishing land ownership and recruiting a large labour force. Recording ownership ot property spurred not only accurate measurement (hence the beginnings of mathematics) but also the first writing. In addition, the management of big construction projects required a tightly defined hierarchy that dictated who would do the digging and who would give the orders and reap most of the benefit.

The same degree of social stratification and mobilization of labour was required to construct the first cities, which were built on the back of the agricultural surpluses generated by irrigation schemes. These first cities were more than just collections of dwellings and workshops. They contained great monumental structures such as temples and palaces, ceremonial avenues, storehouses for tributes,taxes and traded goods, defensive walls, and, linked into the irrigationsystems, canals and aqueducts to bring fresh water to the population.

The great planned cities of the Indus valley, Mohenjo Daro and Harappa, built around 2600 BC, also had systems of covered drains to take away waste water and sewage.

Often different classes – labourers, artisans, merchants, priests and princes – lived in different quarters of the city, the size and quality of their dwellings reflecting their social status. Large numbers of labourers (whether free or slaves) were required to build the great religious and civic monuments – the ziggurats (temple towers) of Mesopotamia, the pyramids of Egypt, the temples and great ritual baths ot the Indus. Artisans produced pottery, textiles, jewellery, stone carving, metalwork and other goods, both utilitarian and luxury, and these, together with agricultural produce, were widely traded by the merchant classes. Trade was not just local: in the later 3rd millennium BC, for example, the cities of the Indus were trading with those of Sumeria in what is now Iraq.

Over all ruled the kings backed up by armed force where necessary. Previous intermittent inter-tribal raiding now this escalated into a new phenomenon: war. In Mesopotamia, the Sumerian city-states of the 3rd millennium BC such as Eridu, Kish, Ur and Uruk were constantly fighting each other, and this in turn gave a boost to technological innovation in the form of city walls, war chariots, shields, spears and metal helmets.

The period of warring city-states was succeeded by a period of empires – for example, those of the Akkadians, the Babylonians and the Assyrians. Political unity over a large area was also established in Egypt in around 3000 BC, and in China in the middle of the 2nd millennium BC under the first dynasty, the Shang.

In the 1st millennium BC, urban civilizations emerged in other parts of the world: in Persia, across India and south-east Asia, in Greece and the Roman empire. 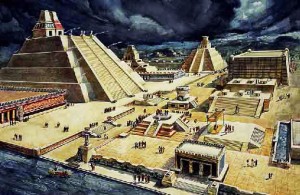 By the 1st millennium AD, great cities such as Teotihuacan – with a population of some 200,000 – were also flourishing in Mesoamerica, and also in the Andean region of South America.

The legacy of the deveopment of cities is around us all today and continues to provide an engine for political, social, cultural and technological development.