Home » Science » How does an Atomic Clock Work ?

How does an Atomic Clock Work ?

The Principles Behind the Clock

A clock’s job is obviously to keep track of the passage of time. All clocks do this by counting the “ticks” of a “resonator.” 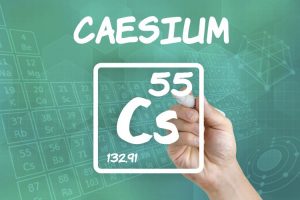 An atomic clock is a clock that uses the resonance frequencies of atoms as its resonator. Basically atoms can be seen to resonate or “vibrate” as they absorb or emit energy.

The electrons in all elements exist at different energy levels (it can help to conceptualise an atom as a positively charged Nucleus with negative Electrons ‘orbiting’ at different energy levels or distances from the nucleus. But be aware this is more a conceptual way to understand it the truth is a litle more complicated). Electrons can only exist as very specific energy level sor ‘orbits’ for each element. As the electrons absorb energy they move to a higher energy state (think of it as moving away from the Nucleus). When an electron releases energy and moves to a lower energy state (think of it as moving towards the Nucleus) the energy lost is emited as electromagnetic radiation (microwave, light wave etc). This movement between the energy states is the “vibration” or oscillation that is going to be measured for the Atomic Clock. Refer to backgrounder below for more information on ‘Energy Levels of Electrons‘

The advantage of this approach is that atoms resonate at extremely consistent frequencies. Atomic clocks use Cesium (also spelt Caesium – confusingly). If you take any atom of cesium, which is what is used in an Atomic Clock, and ask it to resonate, it will resonate at exactly the same frequency as any other atom of cesium. Cesium-133 oscillates at 9,192,631,770 cycles per second. This sort of accuracy is completely different from other type sof clocks because it’s not affected by other environmental issues like temperature — that is what makes atomic clocks so precise.


The Clock in Action

To create a clock, cesium is first heated so that atoms boil off and pass down a tube maintained at a high vacuum. First they pass through a magnetic field that selects atoms of the right energy state; then they pass through an intense microwave field. The frequency of the microwave energy sweeps backward and forward within a narrow range of frequencies, so that at some point in each cycle it crosses the frequency of exactly 9,192,631,770 Hertz (Hz, or cycles per second). The range of the microwave generator is already close to this exact frequency, as it comes from an accurate crystal oscillator. When a cesium atom receives microwave energy at exactly the right frequency, it changes its energy state.

At the far end of the tube, another magnetic field separates out the atoms that have changed their energy state if the microwave field was at exactly the correct frequency. A detector at the end of the tube gives an output proportional to the number of cesium atoms striking it, and therefore peaks in output when the microwave frequency is exactly correct. This peak is then used to make the slight correction necessary to bring the crystal oscillator and hence the microwave field exactly on frequency. This locked frequency is then divided by 9,192,631,770 to give the familiar one pulse per second required by the real world.

An atom consists of electrons orbiting around a nucleus. However, the electrons cannot choose any orbit they wish. They are restricted to orbits with only certain energies. Electrons can jump from one energy level to another, but they can never have orbits with energies other than the allowed energy levels.

Let’s look at the simplest atom, a neutral hydrogen atom. Its energy levels are given in the diagram below. The x-axis shows the allowed energy levels of electrons in a hydrogen atom, numbered from 1 to 5. The y-axis shows each level’s energy in electron volts (eV). One electron volt is the energy that an electron gains when it travels through a potential difference of one volt (1 eV = 1.6 x 10-19 Joules).

The electron can gain the energy it needs by absorbing light. If the electron jumps from the second energy level down to the first energy level, it must give off some energy by emitting light. The atom absorbs or emits light in discrete packets called photons, and each photon has a definite energy. Only a photon with an energy of exactly 10.2 eV can be absorbed or emitted when the electron jumps between the n = 1 and n = 2 energy levels. 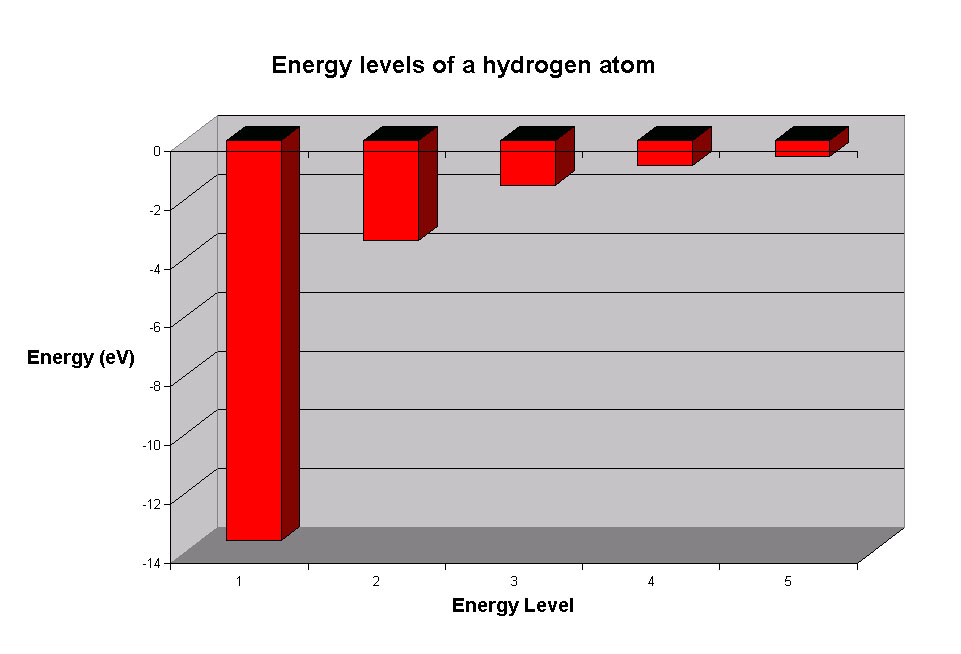