Home » Social Sciences » How long has Antarctica been frozen over ?

How long has Antarctica been frozen over ? 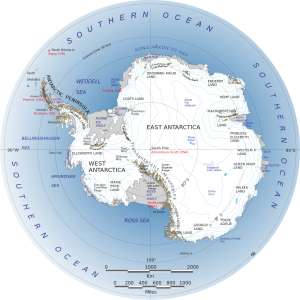 Almost a century ago, the expeditions of both Robert Scott and Ernest Shackleton found evidence, in the form of fossil ferns and coal, that Antartica has not always been a frozen wilderness. Even more impressive evidence emerged in 1991, when scientists uncovered the remains of a dinosaur, Cryolophosaurus which roamed the continent around 190 million years ago.

The date for this dinosaur ties in with geological evidence that Antarctica was then basking in equatorial heat, being part of the huge “supercontinent”, Gondwana.

190 million years ago Antarctica was basking in equatorial heat, being part of the huge “supercontinent”, Gondwana

This began breaking apart around 160 million years ago and what is now Antarctica, Australia and South America drifted south. After around 100 million years, they had all reached their current locations. It took another 40 million years for Antarctica to become the coldest place on Earth, by which time it had broken away from its neighbours and become surrounded by cold ocean currents. For the last 20 million years it has been almost permanently frozen over – there is evidence that the continent became ice-free as recently as 3 million years ago, though no one knows why. Perhaps it was the result of global warming triggered by all those stone age power stations!