Home » General Interest » Is there any scientific basis to the idea of “brainwashing” ?

Is there any scientific basis to the idea of “brainwashing” ? 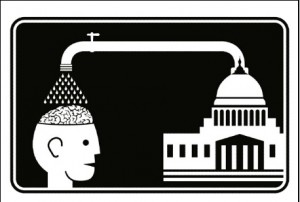 If true, then the idea of “brainwashing” – that is convincing someone to do or behave in some way that they wouldn’t normally – has terrible consequences. It means people can claim they were under this influence when they committed a crime and would mean that we are all vulnerabe to manipulation.


However : The concept of brainwashing seems to have largely been an attempt by Cold War-era Americans to understand how otherwise “normal” people could possibly believe in Communism (the term first appeared in a Florida newspaper in September 1950). The theory was that the people of Russia, China and other Eastern bloc countries must have been stripped of their personalities and “programmed” into blind obedience towards the state.

Paranoia about the power of brainwashing surged at the end of the Korean War, when some American POWs came home denouncing aggression and praising Communism. Within the CIA, however, most concern centred on the possibility that America had been left behind in deploying a new form of warfare.

In fact the CIA spent years trying to develop brainwashing methods but only succeeded in showing how ineffective they were. Initial experiments centred on hypnotising people into performing illegal operations including murder. Secretaries were persuaded to steal documents and fire unloaded guns at but the researchers concluded this said more about the compliance of secretaries than the effectiveness of hypnotic brainwashing. Attempts to persuade people to perform such acts after hearing or seeing a “trigger” signal (as in the 1962 film The Manchurian Candidate) gave hopelessly unreliable results.

Most effort was spent on brainwashing via more forceful means. Denial of sleep, electric shocks, sensory deprivation and psychoactive drugs were all used, often illegally: in 1975, it emerged that the CIA had used LSD on over 1,000 people without their consent. Even so, the results were too unpredictable to be of any value: some victims simply became insane and committed suicide.


So one might conclude that if there is any evidence for the effectiveness of brainwashing, it comes from the CIA’s own actions, the organization apparently having brainwashed itself into justifying such egregious experiments.