The people of medieval Europe were aware that there were other magnificent cultures and powerful rulers apart from their own in the near and far east. However they had no idea that west across the Atlantic, beyond the setting sun, there lay a vast continent where there flourished civilizations of unimagined wealth and brilliance, comparable with Europe’s own classical age of Greece and Rome.

Millennia-old civilizations were wiped out in just a few years

The irony is that, when they did come across these civilizations – those or the Incas and the Aztecs – a handful of European adventurers succeeded, in just a few short years, in bringing about their utter destruction.


The First Humans in the Americas 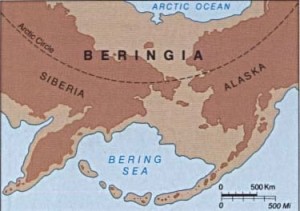 The first humans reached the North American continent from eastern Asia some time during the last Ice Age, when the two continents were linked by a land bridge. This migration probably started about 25,000 years ago up until 8000 BC, when rising sea levels drowned the land bridge across the Bering Strait. Thereafter, human settlement spread rapidly right down the Americas to the extent that by 7000 BC agriculture had started in the Andean region of South America, spreading from there to other parts of the continent.

As agricultural surplus enabled societies to become more complex, the first great ceremonial centres appeared in both MesoamericaMesoamerica is a region and cultural area in the Americas, extending approximately from central Mexico to Belize and the Andes. Some of the most striking monuments – including plazas, pyramids and colossal stone heads – were those built from around 1200 BC on the Caribbean coast of Mesoamerica by the Olmec people. Ceremonial centres grew into temple-cities laid out geometrically on astronomical principles, such as Tiahuanaco in the Andes and Teotihuacan in the Mexico valley.

By the 1st millennium AD Teotihuacan had a population of some 200,000, far larger than any European city of the time, apart from Rome before its fall.

The Mayan civilzations Classic period was c. AD 250–900 after which it went into decline during the 8th and 9th centuries AD and had all but dissappeared by the time that the Inca & Aztec civilizations were at their peak from the 13th Century onwards.

When they sacrifice a wretched Indian, they saw open the chest with stone knives and hasten to tear out the palpitating heart and blood.
European eyewitness in the 16th century

It was in these early civilisations that the characteristics we associate with the later Incas and Aztecs were developed. For example at the heart of their cities and ceremonial centres stood lofty stepped temple-pyramids. There was also a great interest in astronomy and the calendar, and the Maya in particular developed sophisticated mathematical systems, as well as a form of writing that was still in use in Mesoamerica at the time of the Spanish conquest. Finally, there was the practice of sacrificing humans in order to propitiate the blood-hungry gods and to ensure the cycle of the seasons.


The Rise of the Incas and Aztecs

By the time that the first Europeans arrived on the American mainland in the early 16th century, the Mayan civilization had declined and only two great empires held sway over large areas of territory. Much of Mesoamerica was under the control of the Aztecs, while the Andean region, from Ecuador to northern Chile, was ruled by the Incas of Peru.

The Aztecs were the last of a number of warlike states to dominate Mesoamerica in the Pre-Columbian era, and from their magnificent capital Tenochtitlan (on the site of present-day Mexico City) they extorted tribute and human sacrificial victims on a massive scale from neighbouring peoples.

The Inca state appears to have been less bloodthirsty (although human sacrifice was not unknown) and more unified. The task of central government was made easier by a network of well-built roads, which extended for thousands of miles across the length and breadth of the empire. Astonishingly, nowhere in the Americas was the wheel in use; transport depended on foot or – in the Andes – on the principal beast of burden, the llama. As an aid to communication the Incas had a system of knotted strings called quipu, used for accounts and censuses, although, unlike the Maya script, it does not appear to have developed into a more flexible writing system.


Spanish Conquest and the fall of the great civilisations

When the Spanish conquistadores first encountered these civilizations, they were astonished by their magnificence, but also prepared to exploit their own technological superiority. Not only did the indigenous people lack the wheel, their tools and weapons were still made of stone. So when confronted with Spanish soldiers with steel helmets and breastplates, stool -words, firearms and horses, they were hopelessly overwhelmed. 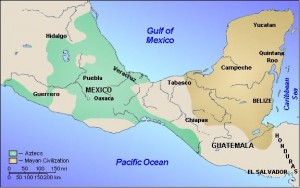 In Mexico, the conquistador Hernan Cortes found that the neighbours of the Aztecs were only too happy to join the Spaniards in attacking their rulers, whose insatiable demands for human sacrifices they had long resented. In just over a year, in 1519-20, Cortes and a few hundred Spanish troops had defeated the might of the Aztecs, whose emperor Moctezuma, believed Cortes to be a manifestation of the god Quetzalcoatl (‘the Feathered Serpent’), and so offered little resistance. 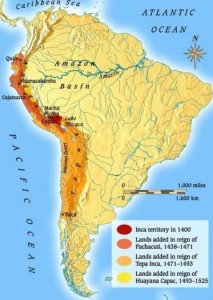 It was a similar story in Peru, where Francisco Tizarro. another ruthless Spanish adventurer in search of gold and power, led fewer than 200 men against the Incas. In 1532 he lured the Inca emperor, Atahualpa, into a trap, massacred his escort of thousands of men, and took the emperor captive. Atahualpa offered Pizarro a roomful of gold in return for his release, but when he got the gold Pizarro went back on his word and ordered that Atahualpa be burned at the stake. When, faced with death, the emperor converted to Christianity, Pizarro relented and had him garroted instead. The conquest of Peru was completed in 1535 with the capture of Cuzco, the Inca capital.


In both Peru and in Mexico, the new colonial power set about enslaving and forcibly converting its subjects, and destroying all residues of their cultures.