It may surprise you to know that on the other side of the World one of the sons of Guernsey is held in such high regard that he has appeared on bank notes and stamps during both the 19th and 20th centurys. Statues have even been raised to him. He is credited with transforming that country from being the poorest in Central America to the wealthiest, in less than a quarter of a century. He is quite literally regarded as a national hero in the South American Country of Costa Rica.

His name is William Le Lacheur and the tale of how he became elevated to be a national hero lies in the heady days of 19th century commerce. A time when Guernsey’s international boat building was at it’s height and local entrepreneurs were venturing out into the wider world to firmly put Guernsey on the map.

Guernsey’s Forest Parish Church Baptism Register reveals that William Le Lacheur was born on 15 October and baptized on 31 October 1802. Christened Guillaume, or William, after his mother’s father Guillaume Allez, William was the third of five children.

William’s parents’ families were farmers, but every so often one of them would go to sea, in search of a more adventurous life. His maternal grandfather was a sea captain and is thought to have been a major influence on William’s decision to pursue a career at sea.

There are no further records of William Le Lacheur until 1827, when he became Captain of the 111 ton brig St. GEORGE, which belonged to Vidamour & Co.

Vessels of this size were plying routes between the Mediterranean, Spain, Madeira, or the Balearic Islands and England, to meet the increasing demand for fresh fruit. Coincidentally, the fruit market was also an important factor in the development of Guernsey’s glasshouse industry.

In 1830, William became Captain of the 55 ton cutter MINERVA. The boat belonged to Amlod & Co and worked the fruit trade between England, the Azores and Spain.

By 1836 William was ready to form his own shipping company

St Peter Port parish records show that in 1837 William and his wife Rachel owned a house at the top of Mont Gibel, now called Constitution Steps. A quiet and healthy part of town, their home was close to Eldad Independent Chapel, where they worshipped.

William and Rachel had at least 7 children, 5 of whom survived: 4 daughters and a son John Allez. Two boys both baptized William died in infancy.

In November 1839 the Royal Court of Guernsey received an application from a James Sebire for permission to open a ship building yard at la Hougue a la Perre, St Peter Port. It seems that he came to an arrangement to build good quality ships for William, under cover and to specifications laid down by Lloyds of London. Sebire built 8 vessels specifically for William, plus a further 2 of the 11 eventually owned by Le Lacheur & Co.

Details of the 8 vessels specifically built for William...


Note : Not all of these boats were intended for the coffee trade with Costa Rica, which flourished after 1843. The SIR THOMAS MANSELL and the MINERVA did not usually venture into the Pacific, but traded between the Mediterranean, the West Indies and England. 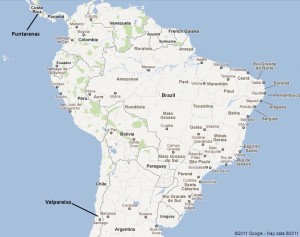 The barque MONARCH was launched from Sebire’s yard in February 1841, sailing to Brazil on her maiden voyage with William in command. She continued from Brazil to Texas in October 1841, when it is thought that William first heard of the possibility of a cargo on the west coast of Central America.

This was a time of global recession, which may explain William’s decision to pit his ship and crew against the seas around Cape Horn – some of the most treacherous in the world – in search of a cargo. He succeeded and the MONARCH returned to London safe and sound in September 1842 from the Gulf of Fonseca, Honduras. She set sail again on 30 October for Pernambuco, Brazil and is next recorded leaving Valparaiso, Chile, on 2 March 1843, for Central America (which then encompassed Costa Rica and its adjoining countries).

Up until this time, Costa Rican coffee was always imported into Europe through middlemen, usually in Valparaiso (in Chile). History was made on 19 October 1843, when the MONARCH docked in London from Puntarenas with the first cargo of coffee to be brought directly from Costa Rica to Europe.

William’s voyages from London to Puntarenas typically took 4 to 5 months, with no trading stops en route. Once clear of the English Channel, his boats sailed close to the Azores and then set a course straight down the Atlantic. They stood well off from Cape Horn before sailing north through the Pacific, directly to Puntarenas. Breaks, if necessary, were always at Valparaiso. After all, trade was extremely competitive and the aim was to complete each leg of the journey as quickly as possible.

Whilst in Central America in early 1842 William made the acquaintance of Herr Steipel, a shipping and commission agent in San José, the capital of Costa Rica. Steipel probably introduced him to the coffee producing family of Montealegre, whose son had studied engineering in England with George Stephenson, creator of the first locomotive The Rocket. This son spoke English, which was significant, as William did not speak Spanish.

William returned to Costa Rica in early 1843 and is thought to have traveled from Puntarenas to the capital, San José, where he was reunited with the Montealegre family. It is likely that they introduced him to Santiago Fernandez, their uncle and one of the most important coffee producers of his day. The MONARCH was loaded with a full cargo of coffee: 5,505 quintals (1,211,100 lbs) in 4,393 bags. Santiago Fernandez sailed with William to England with this full cargo, along with 72 dry hides. William, it seems, did not waste an inch of space.

The job of the captain was to complete the voyage as safely – and as quickly – as possible. To avoid distractions, the buying and selling of cargoes in port was left to a person known as the ‘supercargo’: a post filled by Senor Fernandez on the first direct coffee shipment. However there is no record of this happening again, which suggests that the Costa Ricans trusted William to do it himself.

The coffee was sold to the London Coffee House for 36,700 pesos, paid in silver sixpences and packed into small barrels. This unusual payment method may have resulted from the shortage of coins circulating in Costa Rica at that time. William returned to Puntarenas, where Costa Rican officials confiscated the sixpences, reimbursed the producers in local money, overstamped some of the sixpences with the crest of Costa Rica and probably melted down the rest and reissued it in Costa Rican denominations.

At the request of the Costa Rican government, William used the profits from selling the coffee on subsequent voyages to buy goods such as furniture, sewing machines, farm machinery, coffee production items and textiles and bring them back to Costa Rico for sale. All of which improved coffee production and raised the overall standard of living.

When William first arrived in Puntarenas he found what he described as a ‘poverty stricken and superstitious’ society. The country was nominally Roman Catholic but William decided that one way of helping to defeat the superstition was to take Protestant Bibles to the country. In 1844 the Reverend Wild, William’s minister at Eldad Chapel, sent a letter of recommendation to the headquarters of the British and Foreign Bible Society (BFBS), now known as The Bible Society, in London. He wrote:

“Captain Le Lacheur is a member of my church … he is about to return to Costa Rica … I know of no man in this Kingdom of Great Britain to whom you may with more confidence entrust … Spanish bibles”.


William’s next voyage to Puntarenas was in the schooner LAVINIA, which arrived on 26 January 1845, possibly carrying the first consignment of 200 – 300 Bibles. He continued to take Protestant scriptures to Costa Rica, selling the books at cost and remitting the money first to London and then to the Guernsey Branch of the BFBS.

In 1850 the COSTA RICA, the first of Sebire’s purpose built coffee trading ships, was launched. The country’s agricultural economy went from strength to strength, thanks to William’s cargoes of agricultural and engineering tools. This, in turn, allowed him to operate bigger and bigger ships, to cope with the ever-increasing coffee crop. The fortunes of William’s company and the country were now inextricably linked. In 1851 William spent the considerable sum of 4,000 pesos on a second house in San José, which may also have been used for the burgeoning Protestant congregation. William himself never lived in Costa Rica.

The coffee trade had always been centered in London, and William and his family now moved to a house in Camden Town, London. His children were grown up and his son, John, already had several years’ experience working with his father in the coffee trade.

In 1856, a year before William retired, an army of American military adventurers led by William Walker, the self-appointed president of Nicaragua, set out to plunder and conquer Costa Rica. William had set sail for England two to three weeks earlier in the AMERICA, but was probably aware of the situation and appears to have left instructions for his other captains to help the Costa Rican Government in every way. They immediately suspended the loading of the coffee cargo in Purtarenas and put their ships, the TIMES, the COSTA RICA and the ESPERANZA, at the disposal of the government. The ships transported the army from Puntarenas to Guanacaste in the north of the country where it defeated Walker and his militants at the Battle of Santa Rosa on 20 March 1856.

The local newspaper, the Boletin Oficial, said: “The distinguished Captain Le Lacheur deserves not only the recognition of the Government but of all the Costaricenses”. In 1857, at the age of 55, William Le Lacheur retired from the sea.

Between 1857 and 1859 William had a series of shipping agents in San Jose, but in 1860 he established his son, John, as his permanent representative in Costa Rica. In 1861 Sebire launched the COSTA RICA PACKET, of 531 tons, for William. The largest ship yet to be used in the coffee trade, she was more than twice as big as the MONARCH, the first of William’s ships to sail directly from Puntarenas to London. She spent 18 years sailing between London and the Pacific before she was sold, first to an Irish and then to an Australian firm, where she was used as a whaling ship.

William was living at 47 Gloucester Road, in Regents Park, London, when he died on 27 June 1863, after a lingering illness. He was buried at Highgate Cemetery, North London. The Guernsey newspaper, The Star, in its obituary said:

“Guernsey never gave birth to a man of whom the island had more cause to be proud or who has deserved to be more lamented than him whose decease we record. By his industry and intelligence and his Christian virtues he entitled himself to the highest esteem which society can confer”.

William Le Lacheur’s ships went on to feature on Costa Rican bank notes and postage stamps during the 19th and 20th centuries. He became a national hero, credited with transforming the country from being the poorest in Central America to the wealthiest, in less than a quarter of a century.