Why do things burn?

In a Nutshell :  Things burn because by combining with oxygen they can move to a lower energy state. 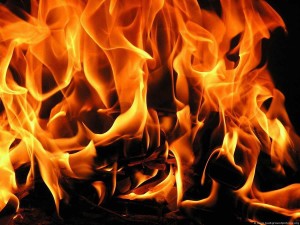 Burning, technically known as combustion, is a chemical reaction where a substance combines with oxygen and releases energy in the form of heat and light, which we see as flames. The substance starts off in a higher energy state, and by combining with oxygen ends up in a lower energy state. In terms of its energy state, matter is like water – it flows downhill. Wherever possible, substances move from a higher to a lower and more stable energy state.

The simplest example of a combustion reaction is when hydrogen burns in oxygen. The two gases combine to produce water, and water is much more stable than either oxygen or hydrogen: try setting fire to it and see for yourself. By contrast, both hydrogen and oxygen are highly inflammable gases because they exist at much higher energy states than water. The difference between the before and after energy states is the amount of energy that is released during the combustion reaction. A lot of energy is released when hydrogen burns in oxygen and this makes it a good rocket fuel. The Saturn V rockets that blasted the Apollo moon-landing missions into space used hydrogen and oxygen as fuel – over 3.6 million litres (960,000 gallons) of it! The first stage tank alone contained enough liquid oxygen to fill 54 railroad tank cars.

If burning moves a substance from a higher to a lower energy state, why doesn’t combustible stuff like wood burst into flames spontaneously? In fact, it is quite hard to set fire to wood, as anyone who has tried to get a campfire going in the rain will tell you. Some substances will catch fire spontaneously, but they tend not to hang around too long. Most require a burst of energy to get the combustion reaction going. This is called activation energy.

The changing energy states of burning wood are like water moving from the top of a slope to the bottom; activation energy is the hump that water has to get over before it can run downhill. Once it gets a little boost to get it over the hump, it will carry on running downhill until it reaches flat ground. Similarly, once the wood gets a boost from a lit match, it will burn to ash. In energy terms, ash is the equivalent of flat ground. In fact, with wood the picture is more complex, because wood itself doesn’t burn directly; instead once it reaches ignition temperature of about 260°C (500°F) the heat causes it to break up and some of it turns into a gas, and it is this gas that burns.


This all relates back to something called the Laws of Thermodynamics … check out our article on Entropy or as we like to put it “Chaos and Disorder – or Why does it always happen to me ?”