Home » Social Sciences » Why do we Lie – The Science behind Lying

Why do we Lie – The Science behind Lying 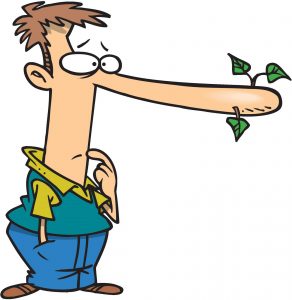 White lies, exaggerations, boldface lies, half-truths, lies by omission, bluffs – there are a multitude of ways to intentionally deceive someone and the human race seem sto be inventing new ones daily.

Although most of us lie daily, our lies differ in complexity, and the intentions of fibs vary, as do the stakes of getting caught. But is it possible to detect deception with 100% certainty? Do our bodies all respond in a similar biological fashion when we stray from the truth?

Telling a lie can be a stressful experience, especially when the consequences of getting caught are high. Your body actually reacts to the emotional stress and anxiety of telling a lie in the same way it does when you experience any environmental stressor or threat : Your fight-or-flight reflex is triggered.

Lying activates a defense mechanism in your nervous system because a threat is perceived, releasing neurotransmitters such as acetylcholine, adrenaline, and epinephrine, which act as chemical messengers, bringing certain areas of your body to action. You feel a surge of energy, and a range of changes take place :

For many years now, the polygraph has been the instrument of choice to pick up on these changes and detect lies. However, the major flaw in these machines is that not all people experience anxiety from lying in the same way.

In particular. those who have psychopathy and antisocial personality disorders, or those who are just more controlled liars, tend not to experience anxiety when deceiving. As well, individuals who experience high levels of anxiety brought on by a variety of triggers, such as the stress of being questioned and the fear of being disbelieved, can create inaccurate spikes in the polygraph.

As an alternative, functional MRI scans are being considered as a tool to examine the main organ responsible for formulating a lie in the first place : the brain. Typically used for diagnosing neurological disorders and mapping the brain, fMRI scans identify brain activity by calculating the changes in blood oxygen levels across brain tissue.

When neurons in a region of the brain are activated, blood flows to the region, and oxygen levels increase. An fMRI makes a series of scans that depict those changes in the flow, essentially reading your mind.

The use of the fMRI to detect lies assumes that telling a lie requires more brain activity than telling the truth-your brain has to work hard to pull off the lie. It is believed that we follow 6 steps when responding deceitfully to a question

Initially there must be :

(1) perception and
(2) comprehension of the question being asked, followed by
(3) memory recollection of information pertaining to the question. Next.
(4) judgment. planning, and decision making come into play, as we must weigh the risks against the benefits and decide between responding truthfully or not. Since it is believed that the brain automatically generates a truthful response,
(5) active suppression of the truth or the response inhibition is required, followed by
(6) delivery of the lie.


It has consistently been shown in studies using fMRI, that there is a higher level of brain activity during a lie. This is especially true in the regions that are responsible for control and decision making.


Unfortunately, there is no universal method for a layperson to detect a lie since we (thankfully) lack noses that grow upon lying. However, advances in technology have provided an array of methods to assist scientists in distinguishing truth tellers from liars.