Home » Science » Why is the sea salty?

Why is the sea salty?

In a Nutshell : The sea is salty because minerals from the Earth’s crust are dissolved by water and washed or blasted into the sea.

OK, so we know the why but that begs the question of how?


What exactly is dissolved in the sea then? 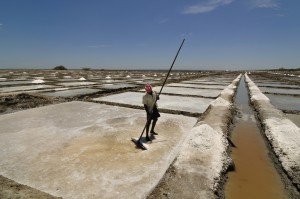 A litre of seawater contains about 7 teaspoons of salt – that’s about 35g. However only about two and half teaspoons of this is table salt (sodium chloride); in fact there are at least 72 chemical elements dissolved in seawater, which almost certainly contains every naturally occurring element on Earth.

All in all there are about 50 quadrillion tonnes (50 million billion tonnes) of dissolved solids in the ocean; this is enough salt to cover the land to a depth of 150m. Rivers and most lakes are nowhere near as salty. Seawater is 220 times saltier than fresh lake water. So why are the oceans so salty while lakes and rivers are not?

In the U.S. alone, rivers and streams dump 225 million tonnes of dissolved solids into the sea every year.

In fact, freshwater is a bit salty. When rain falls onto the ground, seeps through the soil and rock and flows over the ground in streams and rivers, it picks up and dissolves minerals. Eventually these are washed out to sea. Rivers and streams flowing from the US alone dump 225 million tonnes of dissolved solids into the sea every year.


Why isn’t the sea getting saltier then?

Salt also gets into the ocean from hydrothermal vents – fissures in the Earth’s surface. So much water blasts out of these vents that if the oceans were drained dry it would only take 10 million years for the vents to refill them. Once the salt gets into the sea it is concentrated by evaporation.

With all this salt flowing into the ocean and so much water evaporating, the real question is not why is the ocean salty, but why isn’t it getting saltier? If the oceans lost all their salt overnight, it would only take about 250 million years for the world’s rivers to replenish them, yet the rivers have been emptying salt into the oceans for a lot longer than that.

The saltiness of the sea stays the same because the oceans lose salt at pretty much the same rate as they gain it. Salt is lost when it gets laid down as part of new sedimentary rock on the sea bottom, and it is filtered out when seawater seeps down into the crust through cracks in the sea bottom.