Home » Philosophy » Why is there something rather than nothing?

Why is there something rather than nothing?

Why is there something rather than nothing ? Or to put it another way why do we and for that matter the Universe exist ?

These kinds of questions along with their proposed answers form a ‘set’ of philosophical conundrums known as The Cosmological arguments.

Such are the beginning and end of the cosmological argument, and there isn’t a great deal in between: one of the classic arguments for the existence of God, and at once one of the most influential arguments in the history of philosophy.

Like many of the other classic arguments for Gods existence, the cosmological argument has its roots in antiquity, and it is the basis for the first three of one of the most famous philosophers in history, Thomas Aquinas’ Quinque Viae (or Five Ways), a set of five arguments for the existence of God. A modern cosmologist answering the question ‘Why does anything exist?’ would doubtless refer you to the big bang, the cataclysmic explosion 13 or so billion years ago that gave birth to the universe – to energy and matter and even to time itself. But this does not help much – it merely obliges us to rephrase the question: what (or who) caused the big bang?


The Argument in More Detail 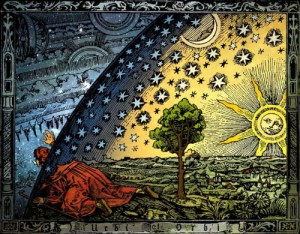 The plausible-looking premise on which the cosmological argument is based – that everything is caused by something else – is based on our experience of how things are in the world. The argument also depends on the notion that an infinite regression of causes is intolerable: the chain must end somewhere, and that somewhere is logically God, who is therefore uncaused (or self-caused). To achieve this God must lie outside the scope of ‘everything’, which must means something like ‘outside all things in nature’. In other words, God must be supernatural.

However even if we allow that the chain of causes has to end somewhere, why can’t the something that is uncaused or self-caused simply be the universe itself? If the idea of self-causation is accepted, God would become redundant.

However such a conclusion sits uncomfortably when you start to consider other things about the cosmos and the human experience, such as what is human consciousness or self, what about the Anthropic Principle : the observation that the existence in this universe depends on numerous cosmological constants and parameters whose numerical values must fall within a very narrow range of values. If even a single variable were off, even slightly, we would not exist.


Whatever you think you will have to agree this is one debate that is set to run and run indeded it’s already been going on for thousands of years already. I know what I believe but you’ll have to decide for yourselves what you believe or ‘know’.

St Thomas Aquinas was a Catholic Priest in the Dominican Order and one of the most important Medieval philosophers and theologians. Even today the study of his works forms a core of the required program of study for those seeking ordination as priests or deacons.

The works for which he is best-known are the Summa theologiae and the Summa Contra Gentiles.