Home » General Interest » Could Huge Dinosaurs Really Sustain Themselves on a Veggie Diet?

Could Huge Dinosaurs Really Sustain Themselves on a Veggie Diet? 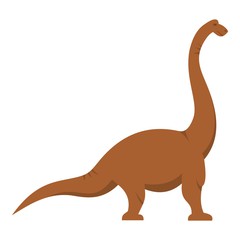 On the face of it there seems little hope of working out precisely how a 75ft long, 50 ton Brachiosaur fed itself. However it is possible to make a few guesstimates, by assuming the present laws of physics and chemistry applied 65 million years ago.

Dinosaurs can be regarded as being pretty similar to us: “thermodynamic engines propelled by food energy“.

For a very rough estimate, we simply divide the mass of the brachiosaur by that of a modern creature like an elephant and assume the amount of food consumed is pro rata. Elephants eat around 350lbs of vegetation a day, so with a mass 16 times greater, a brachiosaur would have needed to munch its way through up to 2.5 tons of green stuff. In reality, the figure is likely to be less than half that.

First, detailed studies on modern animals suggest that their energy demands are proportional to their mass raised to the power of 0.75 (ie mass0·75), so the brachiosaur will need only 8 times as much food as the elephant. Second and much more important, brachiosaurs may have had a more lizard-like metabolism, which burns up energy at less than a tenth of the rate of warm-blooded mammals. Thus, despite its colossal size, it’s possible the brachiosaur could have got away with munching through a similar amount of food to an elephant and perhaps even less, if there was a form of vegetation back then which crammed in far more energy per pound than today’s varieties.


So, to answer the question…

In a Nutshell :  YES is was possible for animals of this size to sustain themselves on a vegetarian diet.

As a final after thought its worth noting that the world during the Mesozoic era, when our Brachiosaur was alive, was a very different place to today – on all levels.