Home » General Interest » How is the Caloric Value of Food Measured?

How is the Caloric Value of Food Measured?

Published on May 1, 2015 in General Interest, Science

The Calorific value of food appears everywhere today. It’s almost as if there’s some malevoalnt conspiracy to make us feel bad about that chocolate bar or bag of crisps we like to snack on. But how do they estimate the calorific values and is it very accurate ?


The calorie or the Calorie … there is a difference

A calorie is nothing more than the measurement of the ability of a particular nutrient to raise the temperature of 1g of water 1 degree Centigrade.

Calories are measured by an apparatus called a calorimeter. The piece of food to be measured is placed inside a chamber, sealed, and then ignited and burned. The energy released from the food heats water surrounding the chamber. By weighing the amount of water heated, noting the increase in the water’s temperature and multiplying the two, the energy capacity of the food can be measured. A calorie is nothing more than the measurement of the ability of a particular nutrient to raise the temperature of one gram of water one degree Centigrade. For example, if 10,000 grams of water (the equivalent of 10 liters or 10,000 cubic centimeters) surrounding the chamber is 20 degrees Centigrade before combustion and then is measured at 25 degrees after combustion, the difference in temperature (5 degrees) is multiplied by the volume of water (10,000 grams) to arrive at the caloric value (50,000 calories of energy).

If 50,000 calories sounds like too high a number to describe heating 10 liters of water 5 degrees, your instincts are sound. One calorie is too small a unit of measurement to be of practical use, so the popular press uses “Calories,” really kilocalories, 1,000 times as much energy as the lowercase “calorie.” 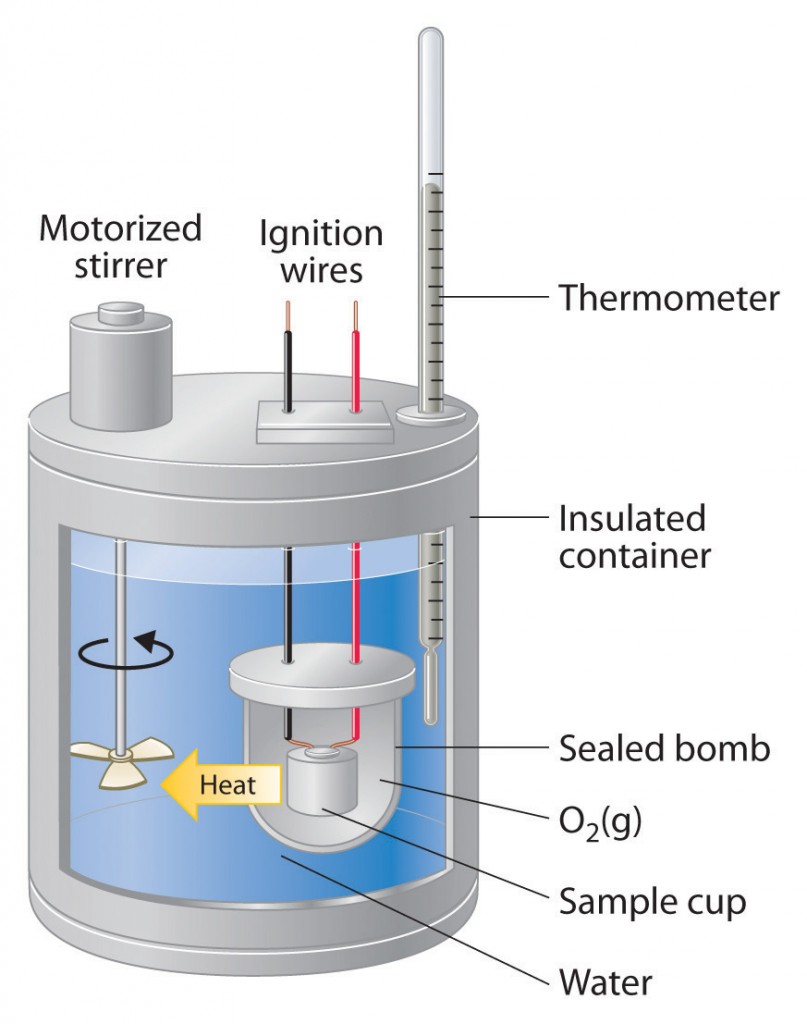 The calorimeter is a crude but reasonable model for how our body stores and burns energy sources. The calorimeter slightly overstates the number of calories our body can use from each foodstuff. In the calorimeter, foods burn completely, with only some ashes (containing minerals) left in the chamber. In our body, small portions of food are indigestible, and are excreted before they break down to provide energy. The rules of thumb are that 2% of fat, 5% of carbohydrates, and 8% percent of proteins will not be converted to energy by the body.

Food scientists have long known the caloric count for each food group. One gram of fat contains more than twice the number of calories (nine).

Scientists can easily ascertain the proportion of fat to carbohydrates or proteins, so it might seem that calories could be measured simply by weighing the food. When a food consists exclusively of proteins and carbohydrates, for example, one could simply multiply the weight of the food by four to discover the calorie count.