Home » Science » We are Stardust …

alchemy…the process of transmuting a common substance into a substance of great value.

The chemical elements that make up our bodies, including the iron in our blood and the calcium in our bones, originated, with one exception, in the turbulent body of a star. The exception is hydrogen, the most abundant element in the universe, which formed the starter material for all stars and still provides the fuel for the nearest star, our sun. Hydrogen is a simple element and it can be visualized as having a single particle, a proton, as its nucleus and another, an electron, ‘orbiting’ round it, although this model is now considered oversimplified. It is the building block of the other chemical elements, which have more nuclear particles and more electrons.

In a sequence of events during the life cycle of some stars, hydrogen atoms under pressure combine to produce heavier elements like helium, and the helium under further high pressure and temperature forms carbon and oxygen. By this stage the original atoms consisting of one proton and one electron have combined to form larger atoms, some with 6 protons and electrons (carbon) and others with 8 of each (oxygen). As the star becomes denser and denser the force of gravity crushes these atoms together to produce yet heavier ones until the process stops with iron. With iron atoms, made up of 26 protons and electrons, the process of crushing together to make even heavier atoms stops, and the star’s core acquires more iron and becomes heavier and heavier until the star collapses under its own weight. 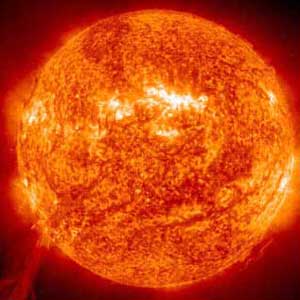 The process of getting from hydrogen gas to a solid iron core takes about 10 million years, but all that hard work is undone in the space of less than a second as the star collapses. Then a shock wave travels out from the centre of the star and blows off the outer layers, which contain a range of elements that were intermediaries on the way from hydrogen to iron – silicon, oxygen and carbon. This explosion results in a huge emission of light and other energy over a few days, and can be observed as what’s called a supernova, when a star seen from the Earth increases many times in brightness before lapsing back to a dimmer state.

Those heavier elements, forged in one star, now spread out into space, eventually to form other stars like our sun, which was formed out of a cloud of matter attracted by gravity towards a central point. Some of the elements in that cloud condensed into planets, including the Earth, and thus all the heavier elements that started out in the outer shell of a star came to their final resting place, on the Earth’s surface and in its atmosphere. From there it was a short step for a small proportion of that ‘Stardust’ to become incorporated in our bodies, in the following proportions: 65% oxygen, 18% carbon, 3% nitrogen, 1.5% calcium, 1% phosphorus, 0.35% potassium, 0.25% sulphur, 0.15% sodium, 0.05% magnesium and copper, zinc, selenium, molybdenum, fluorine, chlorine, iodine, manganese, cobalt, iron (0.70 %).

However it’s unlikely that the hydrogen in our bodies – 10% of the mass – came from the explosion of a distant star since there’s much more available as gas between the stars.