Home » Philosophy » Who ‘discovered’ the Atom ?

Who ‘discovered’ the Atom ? 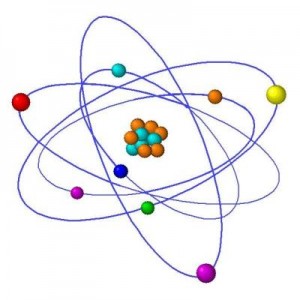 The simplest of experiences can hatch eureka moments. Legend has it that despite all his inherited wealth and global travels, the ancient Greek philosopher Democritus hit upon one of the most fundamental of ideas in physics while sitting in the comfort of his own home.


THE DEVELOPMENT OF AN IDEA

He called this an atom, which means ‘uncuttable’ in Greek

According to popular belief, it was the smell of bread that instigated his groundbreaking theory. As a servant walked upstairs with a fresh loaf, Democritus had a brainwave – he deduced that for the smell to reach his nostrils, there must be some minute particles of bread escaping from the loaf and wafting through the air. If that was the case, then he surmised that a lump of cheese could be cut in half, then half again, and so on. But eventually there would be a minute piece of cheese that could not be cut in half, not because there was no knife sharp enough, but because the final particle was not something that could be sliced. He called this an atom, which means ‘uncuttable’ in Greek.He also believed that the Universe was made up of these atoms that flew around chaotically, billions upon billions of them bumping into one another and amalgamating to form round planets.

This idea of atoms and spherical planets were very extremely advanced for 400 BC, and, as with any theory that’s ahead of its time, if you can’t prove it, it often gets forgotten – particularly if someone else shouts louder about a different idea.

It would be another 1,800 years before the concept of matter being made up of minute particles would rear its head again

As Democritus passed away at the grand old age of 90, the ideas of a young Greek philosopher by the name of Aristotle were starting to be adopted. Aristotle claimed that all matter was made up of five elements: earth, fire, air, water and an aether (the upper sky). As a philosopher, he believed that all life was ordered and controlled by forces such as love and conflict, which completely contradicted Democritus’s chaotic world. It would be another 1,800 years before the concept of matter being made up of minute particles would rear its head again – through the work of a mystery scientist.

In the thirteenth century, an anonymous alchemist suggested that all bodies were made up of an inner and outer layer of minute particles, which he termed ‘corpuscles’. Under the pen name Geber, the secretive scientist described how metals and compounds such as mercury and sulphur could be broken down into their constituent corpuscles.

This idea rumbled around the laboratories of science for a few centuries, but it was the groundbreaking work of Anglo-Irish scientist Robert Boyle, and then English scientist John Dalton, that really paved the way for the discovery of atomic theory. 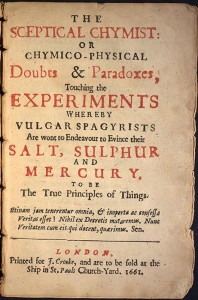 In his aptly-named book The Sceptical Chymist, published in 1661, Robert Boyle suggested that all matter is made up of tiny particles joined together in different ways, and that materials could be made of more than one element – a compound. Over a century later, John Dalton elaborated on this idea, realising that different elements are made up of different atoms, and when these combine in specific proportions they form compounds.

Dalton was the first to define exactly what an element was, as well as create symbols for each of the elements, which Dmitri Mendeleev later embellished on with his creation of the Periodic Table. 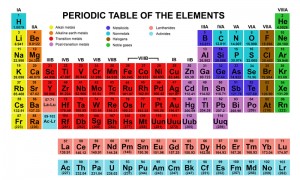 But, even as late as 1900, the physical reality of atoms was still rejected by influential scientists, most notably the Austrian physicist Ernst Mach and the German chemist Wilhelm Ostwald. Their refusal to countenance the existence of atoms was based largely on a Positivist agenda, in which the lack of direct evidence for atoms – and the supposed impossibility of obtaining any – in essence implied their non-reality.

In 1905 a paper appeared that ultimately established the reality of atoms. It was an analysis of the phenomenon of so-called Brownian motion, the random movement of particles in a suspension, which was shown to be explicable by the existence of atoms. The author of the paper was a young patent clerk named Albert Einstein. Within two years experimental studies of Brownian motion had compelled even the most sceptic of scientists to accept the reality of atoms.


LOOKING INSIDE THE ATOM 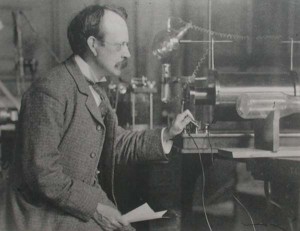 The first insights into the nature of atoms actually emerged in 1897, when British physicist Joseph John Thomson saw how so-called cathode rays passing through electric and magnetic fields bent towards a positively charged electric plate. It dawned on him that these must be negatively charged particles – and, more crucially, that the particles must be coming from within the actual cathode. He revived the name ‘corpuscles’. Through his extensive series of experiments, Thomson had discovered electrons and so deduced that atoms are made up of even smaller particles.

Reportedly, in his Cambridge laboratory, Thomson toasted the electron’s discovery with the words: “To the useless electron.” In fact, this ‘plum pudding’ model, so-nicknamed because the particles were thought to be like plums in a pudding, won Thomson the 1906 Nobel Prize for Physics and proved helpful in understanding key physical phenomena, such as electricity. 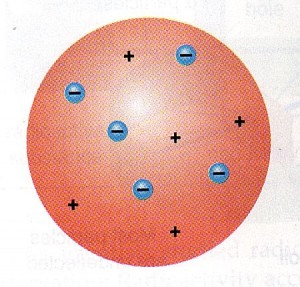 In the following years, a number of physicists and chemists worked together to identify more of the structure of atoms. Physicists Ernest Marsden and Hans Geiger tried firing all sorts of particles at various substances, measuring the deflection angle. Their results showed that the plum pudding model didn’t quite ring true, as there was a central mass which deflected the rays at a greater angle than the external parts of an atom. In 1911, the physicists’ mentor New Zealand-born physicist and chemist Ernest Rutherford suggested that the atom was made up of a dense nucleus orbited by electrons.

From this concept of electrons whizzing around a central mass, a bit like planets orbiting the Sun, another of Rutherford’s student called Niels Bohr then devised a system for the structure atoms. Bohr’s model proposed that electrons orbit the nucleus in fixed ‘shells’. Each element’s chemical properties depend on the number of electrons in the outer shell But, in 1918, Rutherford cracked a problem that had been puzzling them all for a while.

The way in which elements reacted didn’t coincide with their masses. Rutherford solved the problem by working out that the negative electric charge of an electron was balanced by a positive charge in a particle called a proton. The remainder of the atom’s mass was made up by ‘neutrons’ with a neutral charge, which, like protons, are found in the nucleus.

To give an idea of scale, the nucleus would be the size of a pea in an atom the size of the Albert Hall, with electrons the size of grains of sand whizzing around the stands

To give an idea of scale, the nucleus would be the size of a pea in an atom the size of the Albert Hall, with electrons the size of grains of sand whizzing around the stands. Maybe it is not surprising then that it took another 14 years for the neutron to be found and its existence confirmed, winning James Chadwick a Nobel Prize in 1935.

We now know that there are even smaller subatomic particles that make up matter, such as quarks and gluons. It’s not actually possible to see these – instead, their behaviour and properties have to be gauged by studying the debris left over from particles that contain them.

Deep below the French-Swiss border the world’s most powerful particle accelerator, the Large Hadron Collider, is revealing them by colliding ‘beams’ of particles accelerated inside a 27 km-long tunnel. By analysing their properties, scientists hope to understand the life story of matter in the Universe.