Why Do Humans Walk Upright ?

This is one of those questions that until you ask it, you take the ‘answer’ for granted, the answer is “well of course it’s like that, why wouldn’t it be?”. However once you’ve asked it , it doesn’t seem so obvious at all.

This is one of those mysteries that refuse to lie down (if you’ll pardon the pun). It’s also one of those questions where there’s much debate and no clear answer. However there are some good theories that are interesting to chew over.

There are probably over a dozen theories that had been put forward over the last century or so. We’ll just debate some of the more interesting ones in this article. 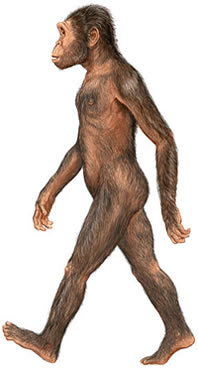 In 1871 Charles Darwin made the perfectly reasonable suggestion that bipedalism emerged in order to free up the hands for holding tools. While this no doubt have brought an evolutionary advantage, it does not seem to have been the primary driver: fossil and molecular evidence suggests that the first humans were were standing upright around seven million years ago – 4.5 million years before they began making tools.

Standing upright allows creatures to see further – which is true, though even a doubling in height increases visual range by less than 50%.

Exposure to the tropical sun :

More recently it has been suggested is that bipedalism reduces the skin surface area exposed to the noonday sun; again, calculations suggest the benefits are marginal.

On of the more comprehensive explanations was put forward in the 1980s was that climate change, which led to dwindling woodland conditions and thus more sparse food resources led to bipedalism, as it is a more energy-efficient way of getting the required amount of food. However, and there’s always an “however” isn’t there?, critics immediately pointed out that studies had shown that quadrupeds (like dogs) get around far more energy-efficiently than humans. Which is true, but also irrelevant: the point is that a bipedal human is more energy-efficient than a human forced to get around on all fours. On the whole this seems pretty cogent argument but it hasn’t stopped others coming up with yet more theories…

In the early 21st century a suggestion was made that “squat-foraging” with the hands led to changes in anatomy that made bipedalism virtually inevitable.

There’s some plausible theories but nothing definitive … so as with a lot of questions of this ilk … take tour pick !