Why do men go bald?

Say what ! … I think we’d better explain this one.


The way it is

There are 193 species of monkeys and apes in the world today, but only one of them is hairless: us ! This unusual fact led anthropologist Desmond Morris to come up with his famous phrase ‘the naked ape’. In fact humans are not completely naked; we have several patches of hair, most notably on top of our heads. The average person has around 100,000 hairs on his or her head, although blondes have finer, more numerous hairs, while redheads have the thinnest hair.

There are 193 species of monkeys and apes in the world today, but only one of them is hairless…us

On average you can expect to drop about 62 of these hairs every day, but you can also expect to grow about the same number of new ones. As you get older this cycle of loss and regrowth changes: hairs are lost more quickly while new ones grow more slowly. For a sizeable minority of the population, almost all of them male, the cycle stops completely and lost hairs are never replaced. The naked ape becomes the bald ape.

One in six men go bald, while one in twenty has a receding hairline by the time of his twenty-first birthday. Why is this? 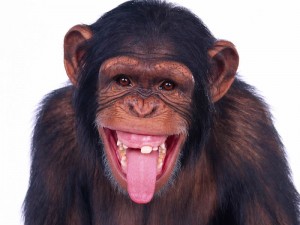 Baldness seems to be genetically determined: you inherit baldness from your father or grandfathers. If we have genes for baldness, we must have them for a reason, otherwise they would have been weeded out by evolution. But what possible evolutionary advantage could come from baldness?

Sociobiologists have discovered that women associate bald men with greater social maturity, wisdom and calmness, and this fits with the general stereotype in our society linking baldness and wisdom. They’ve suggest that some of our apewomen ancestors found these ‘bald’ qualities more attractive than the immature aggressiveness of younger, hairier apemen, and this explains why baldness not only survived but thrived.

Sounds a bit tenuous doesn’t it ? Well to try to back this up it should be noted that some other apes and monkeys can go bald, and in chimpanzees there seems to be a relationship between social status and baldness. Bald chimpanzees tend to be respected older males. Perhaps baldness in humans evolved along similar lines?