Why Does Ice Float?

Water is one of the strangest chemicals in the universe, and many of its strangest features turn out to be essential for life as we know it, particularly the almost unique property of water related to freezing. So why does it float when it becomes a solid?


In a Nutshell :  Ice floats because it is less dense than water thanks to the hydrogen bonds between water molecules.

Unlike nearly every other liquid, water expands when it freezes into a solid, by about 9 per cent, and as a result ice is less dense than water.

This is weird because what is supposed to happen when a liquid freezes is that all its atoms and molecules stop zooming around and settle down into a stable, regular pattern.

A Useful Analogy :  Imagine trying to cram a lot of people into a phone booth. If they were jumping up and down and waving their arms around you wouldn’t fit too many of them in the booth – in other words, there would be a low density of people. But if the people were standing still with their arms by their sides you could pack a lot more of them in, and there would be a high density of people in the booth. This is normally what happens with the particles in a liquid and so they are less dense than solids.


In liquid water the hydrogen bonding actually allows the molecules to get closer together than the particles that make up most other liquids – about 15 per cent closer. As water cools, its molecules have less energy and they slow down and cluster together, as with any other liquid. This continues until water reaches its maximum density at about 4°C (39.2°F), but below this something unusual happens: each water molecule starts to form all four of its possible hydrogen bonds, so that by the time water freezes at 0°C (32°F) the water molecules are locked into a rigid lattice with a much more open structure than the loose arrangements of molecules in liquid water.


Extending the Analogy :  Imagine that all the people in your crammed phone booth grab hold of one another by sticking their arms out straight. They are locked into a solid mass, but they end up further away from one another than if they were jiggling about with their arms by their sides. This is basically what happens in ice.

The lower density of ice makes life on Earth possible. If ice didn’t float it would sink. A pond would quickly freeze solid in winter as ice formed at the surface and then sank to the bottom, exposing more water at the top to freeze, and so on. Instead the ice layer floats on top, insulating the rest of the pond. Any fish that live in the pond can survive because the bottom of the pond stays liquid. 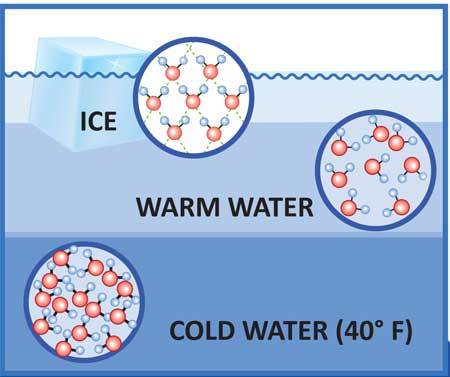 The buoyancy of ice also has important consequences for shipping, as the Titanic learned to her cost. When glaciers feed into the sea huge chunks of ice calve off the ends, forming icebergs that float in the ocean. In the Arctic about 12,000 icebergs calve off glaciers each year, weighing on average around 1.5 million tonnes, poking 80 m (87.49 yd) out of the water and extending more than 350 m (382.76 yd) below the surface. Fortunately relatively few of them reach the Atlantic, and they shrink by up to 90 per cent by the time they do.